The U.S. killed at least 25 Ktaib Hezbollah fighters on Sunday night in its first counterstrike in a decade against an Iran-aligned Iraqi Shia militia. U.S. F-15E aircraft struck three sites in Iraq and two in Syria in retaliation for Ktaib’s Friday rocket attack, which killed an American contractor and wounded four U.S. service personnel. END_OF_DOCUMENT_TOKEN_TO_BE_REPLACED 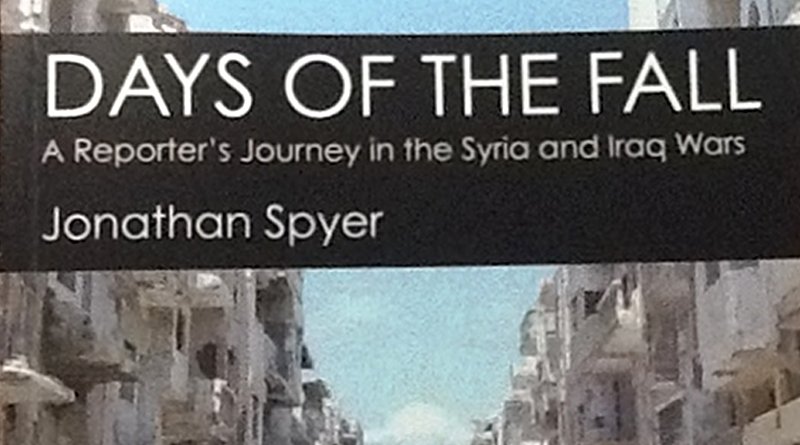 Author and journalist Jonathan Spyer’s latest book explores the disintegration of the Middle East over the past decade. Days of the Fall: A Reporter’s Journey in the Syria and Iraq Wars is an up-close and personal account of the two major conflicts in the region that exemplify its descent into chaos, both physical and moral.

Spyer had been focusing on the Levant in general, and Syria in particular, for a good few years before President Bashar al-Assad’s regime was caught up in the revolutionary fervour sweeping across the Arab world. END_OF_DOCUMENT_TOKEN_TO_BE_REPLACED

The Syrian-Turkish border area in the early morning hours is calm and almost serene. Driving from the town of Kobane to the border crossing at Semalka one may get the impression that there is not much of a war remaining at all in the country.

Every few kilometres, to be sure, one runs into a checkpoint of the Kurdish-dominated Syrian Democratic Forces or the Asayish security police. END_OF_DOCUMENT_TOKEN_TO_BE_REPLACED

Syrian regime and Russian forces are currently preparing for an offensive into Idlib Province in north west Syria. The attack on Idlib is set to mark the final major action in the war between the Assad regime and the insurgency against it.Moscow has moved 10 warships and two submarines into the waters off the western coast of Syria.  This represents the largest concentration of Russian  naval forces since the beginning of Moscow’s direct intervention into the civil war in Syria in September, 2015. END_OF_DOCUMENT_TOKEN_TO_BE_REPLACED

The arrest in a Prague hotel of former Syrian Kurdish PYD (Democratic Union Party) leader Saleh Muslim Muhammad is a test case. Its outcome will establish the extent to which the central role Syrian Kurds have played in the fight against Islamic State has accrued some broader political legitimacy for their leadership and organizations.

Czech authorities arrested Muslim over the weekend after a Turkish participant at a conference in Prague took a photograph of him that was published by the Milliyetnewspaper. END_OF_DOCUMENT_TOKEN_TO_BE_REPLACED

Why the failed Russian Sochi conference matters for Israel

The clear failure of Russia’s ‘Syrian National Dialogue Conference’ in the Black Sea resort of Sochi shows the limitations of the policy adopted by Moscow with regard to the Syrian civil war.  Since Israeli diplomatic efforts to contain the westward advance of Iran and its proxies in Syria are to a considerable extent dependent on the notion of Russian potency and effectiveness in this arena, decisionmakers in Jerusalem will have been watching the unfolding events at the conference with interest and some concern. END_OF_DOCUMENT_TOKEN_TO_BE_REPLACED

The Jerusalem neighbourhood in which I live, on the seam line dividing Jew and Arab, can be a useful place to take the temperature of the Israeli-Palestinian conflict.

In 2015 a wave of stabbing ­attacks against Israelis and Jews began. This was the result of a campaign of incitement by Islamist groups, according to which the government of Israel planned to change the status quo regarding the Temple Mount/Haram al-Sharif. Jewish prayer is forbidden on the Mount. The rumours held that this was set to change. Wilder notions of plans to replace the mosques with a rebuilt Jewish temple also were repeated. END_OF_DOCUMENT_TOKEN_TO_BE_REPLACED

The advance of the Iran-supported Iraqi government and paramilitary forces against their Kurdish opponents moved forward this week.

The Kurdish Regional Government, in a statement issued on the morning of October 25, offered to “freeze” the results of the referendum on independence conducted on September 25, in light of what it called the “grave and dangerous circumstances” currently prevailing. END_OF_DOCUMENT_TOKEN_TO_BE_REPLACED

JERUSALEM – Israeli officials believe that Iran is winning its bid for dominance in the Middle East, and they are mobilizing to counter the regional realignment that threatens to follow. The focus of Israel’s military and diplomatic campaign is Syria. Israeli jets have struck Hezbollah and Syrian regime facilities and convoys dozens of times during Syria’s civil war, with the goal of preventing the transfer of weapons systems from Iran to Hezbollah. In an apparent broadening of the scope of this air campaign, on Sept. 7 Israeli jets struck a Syrian weapons facility near Masyaf responsible for the production of chemical weapons and the storing of surface-to-surface missiles. END_OF_DOCUMENT_TOKEN_TO_BE_REPLACED

The neighbourhood of Hay al-Arabi in eastern Mosul city has the appearance of a place recently visited by apocalypse. This was one of the last areas east of the Tigris River vacated by the Islamic State organisation, before the advance of the Iraqi armed forces in late January. END_OF_DOCUMENT_TOKEN_TO_BE_REPLACED